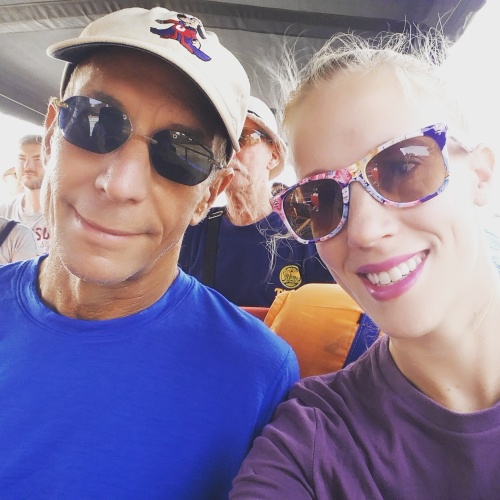 Well, our Mekong river cruise rolled around right when I was starting to feel better, and also when Larry came down with whatever I got. No amount of talking will convince this man not to share water bottles with me, but whatever. And then I started to feel sick again too… luckily we’re both feeling better now, and our less-that-peak fitness didn’t stop us from taking advantage of the amazing 3 day/2 night cruise we went on.

Aside from waking up early, it was actually a bit of a relief to be on the cruise while sick; none of the activities were terribly taxing, and being away from the saigon pollution and having amazing 5 course meals provided was great. So we soldiered on and got to see the mighty Mekong.

The river itself is not especially beautiful: the 12th longest river in the world ends in this delta, and like all of the world’s grand estuaries, it is full of silt and downright brown (not exactly appealing for a nice swim, although we saw plenty of local children who, through their actions, disagreed). But the scenery around it was a beautiful jungle, and like all of vietnam, it was filled with locals living a day-to-day existence so interesting and wonderful. 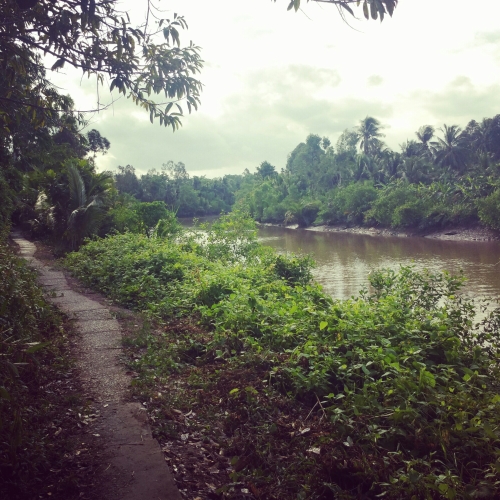 On day one, we went on a walk through the jungle, while our guide pointed out to us all the amazing foliage and explained to us what they were as well as their significance through history. For example, the Cassavia plant (it looks almost like a Marijuana plant but with two extra leaves on either side) which was fundamental to the locals survival during the American War. Agent orange gas and bombs were used as defoliants, destroying all plant life with the goal of giving American pilots a better view of the ground. Cassavia roots survived, providing the Vietnamese with food when all other plants could not. Cassavia root is used in so many things, most notably in the creation of tapioca! I never knew this. We also ate it in a few of our on-ship meals, and it was delicious. We were shown Durian fruits the size of human heads (by far the biggest fruit I’ve ever seen) as well as mangosteen, passionfruit, drangonfruit, lychee, and these tiny little red berries that tasted EXACTLY like Berry Berry Kix. Like, exactly! They were so sweet and good, after being hesitant to even eat one, we kept pulling down branches to grab as many ripe ones as we could reach. It was an amazing walk.

We also got to see a Cao Dai temple on this walk. This religion exists exclusively in vietnam: it’s a mixture of Buddhism, Christianity, and Islam. The founder of it (rightly) thought that all of these religions contained a core truth, and lamented the fact that each of their prophets was only around to influence a small group of people in a certain time. So he thought to combine the inherently human parts of each into the Cao Dai religion. It has a home for the monks as well as a temple where the locals come four times per day to pray: 6 and 11 o’clock in the mornings and evenings. Very cool, and a beautiful building. 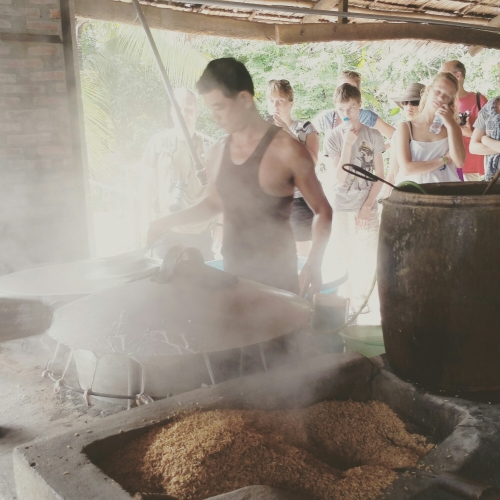 The next morning we took a small boat into the town of Can Tho to see a traditional rice noodle factory (let me tell you, when we hear “factory” we imagine a big metal building with smoke stacks and an assembly line- SO not the case!) Even though most of the rice noodles in Vietnam (and elsewhere) today DO come from more modern factories, there are still some traditional ways to make them in the Mekong that are still going strong. We got to walk into the thatched-roof hut to watch the process of combining fine rice floor, cassavia (tapioca), and water to make rice paper and then shred it into fine noodles. Very cool. Larry and I even ate a few fresh samples raw and crunchy, much to the chagrin of all the German and Irish people that were on the tour with us 😉
That afternoon we had the choice to either participate in a cooking class on the boat or go on another jungle walk, but we both passed out. Hey, we were sick and we needed it!
We met a really cool Irish couple who was adventuring through South East Asia for their honeymoon. They had assigned seating next to us in the dining room and were such pleasant company. I got their email address, and if I ever make it to Ireland I will look then up!

The final day was still full of fun and activities. We took a sampan boat ride through a super narrow tributary of the Mekong, with an amazing local woman rowing for us. It was a short trip but so beautiful. (You know that scene where Forrest Gump is walking neck-deep with his rifle over his head, and “Stop Children What’s That Sound” by Buffalo Springfield plays in the soundtrack? Yeah, we were THERE.)
The next stop was to a coconut candy “factory”, in a hut, where coconut milk was made into candy mixed with a million different fruit flavors.  They provided us with Jasmine tea and a sampling of their candies, which are really caramel-like, but with an exceptional flavor. They also had candied ginger, banana chips, and pop-rice candy, as well as honey and royal jelly from their bees, which I bought a small jar of (for about 1/20th the price that Whole Foods sells the stuff).
After that we took a bike ride through the city of Cai Be, and then it was back on a small boat to to the dock where we’d get on the van that would take us to Ho Chi Minh.

Larry kept asking “who is the manager? Who is in charge?” Because he had such a good time and wanted to leave tips for everyone. But the two main boys who served as our tour guides said “nobody”. They were only about 25 years old but in charge of everything. And I mean EVERYTHING, and they did such a great job! I even left my scarf in my room on the boat (had used it as an extra blanket) and they not only put it in a plastic bag, but they knew what my luggage looked like and tied the bag to it and put our luggage on the van for us.

Every part of the tour was flawless.
We got back to Saigon earlier tonight, checked into our same hotel, and then used our trusted TripAdvisor for another dinner recommendation. I tell you, i have not had a single less-than-spectacular meal in this country, from the cheap pho stalls in the Ben Thanh Market to the fanciest sushi restaurants- the food here is TO DIE FOR. Since trying out non-vietnamese cuisine for the first time in Saigon (Soul Burger- OH MY GOD!) the other night was great, I decided to go with pizza tonight. Sorry for the expletive, but HOLY SHIT. First of all, there’s no way I’d call Pizza 4P’s Restaurant “Italian” or even “Western”- this was Asian Fusion at it’s most artful. They make all their own cheese! Between me and Larry we got THREE appetizers, a record for the feingersh family, i think, and especially impressive considering it wad only the two of us. Prosciutto wrapped mango with passion fruit syrup (!!!!!!!!), ratatouie, and warm zucchini salad. 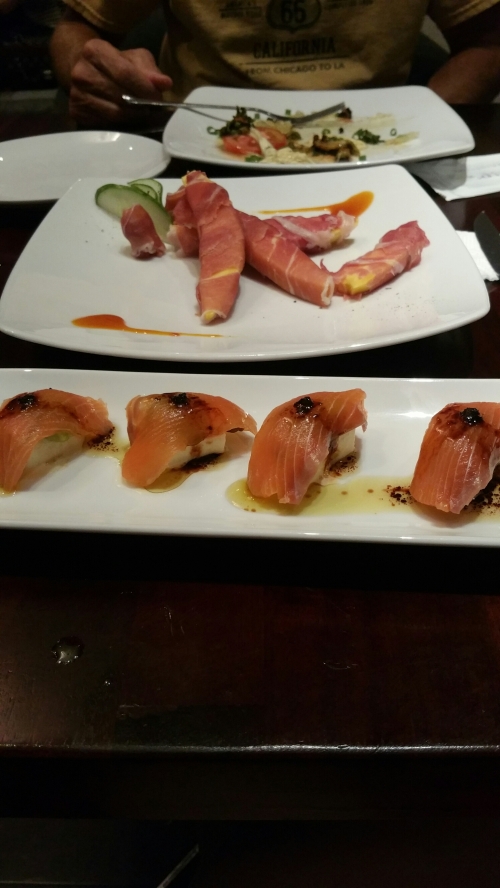 Then for a main course we had a SALMON SASHIMI WITH SOUR CREAM PIZZA. Just read that last sentence to yourself a few times, and salivate. I’d never seen anything like this menu in my life. Larry was talking about inventing a teleporter so he could come to Saigon every night for dinner. That’s how good it was.
Anyway, we only have two more nights here before it’s time to head home. I can’t believe it’s gone by this fast. I’m sad to leave, Vietnam has been nothing but wonderful to me. The people are bright, beautiful, helpful and fun, the cities and the scenery have been dazzling, beautiful, and overwhelming (in the best possible way), the prices are a steal, the shopping is fantastically fun, and all the people I’ve met I’ll remember forever. But most of all this has been an absolutely priceless experience and I sincerely hope to come back some day.
My mission now is to enjoy tomorrow and Monday and take in everything i possibly can- I board my flight home late Monday night, and arrive back in Texas early Tuesday morning (since I loose 12 hours coming home).
One thing makes leaving here really easy- my precious baby Duchess, who has been pampered and spoiled by my mom in my absence. I can not WAIT to collapse on my floor and let her attack/lick me to death. Thanks for taking care of her mom, i know she loves you dearly and so do I 🙂

PS: I spied a tank in the candy factory and immediately ran over to it and asked to hold its sole occupant: a ball python, subdued after his monthly duck. What is wrong with me? They didn’t offer this up, I ASKED. And boy was he muscular, strong, and creeeeepy. But I’m glad I held him! Quite the experience!

This entry was posted in Uncategorized. Bookmark the permalink.