VietJet airlines is crazy but efficient. I thought the mexican airport was nuts but it’s nothing like this; neither culture exactly queues up, but in Mexico there’s still a general order to things and it works on a first-come-first-serve basis, whereas here there’s a lot of push-and-shove chaos at the ticketing desk. (By the way, I only keep comparing these two cultures because they’re the ones I know). 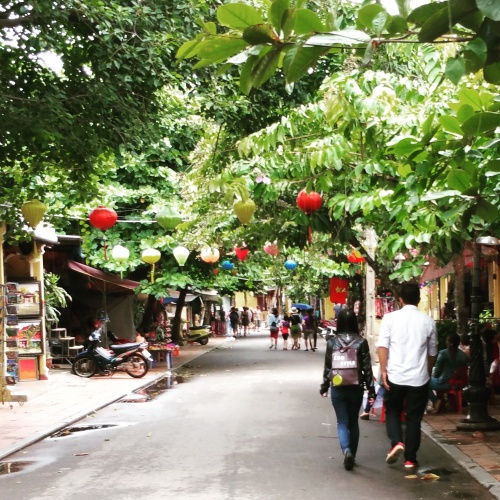 Main street in Hoi An, very quaint and traffic-free

Anyway, I’m here in the ancient town of Hoi An now and it is so awesome. My hotel would easily go for $300 a night if it were in the states, and I’m paying about $40. The town itself is very small and quaint, and is known for a few things: great food, cheap tailors, lanterns, and being over 1000 years old (they celebrated that birthday in 2011). 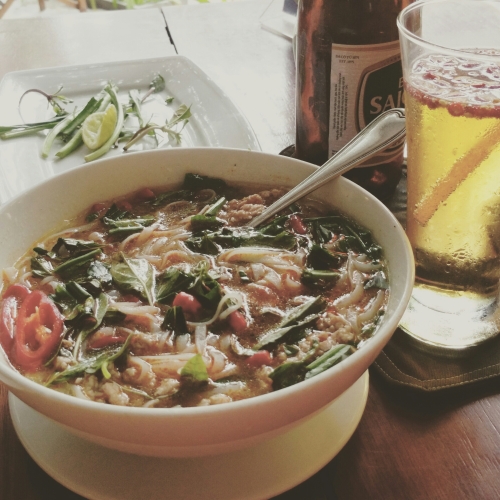 So far I can vouch for the food– its exceptional. The pho in Hanoi didn’t have many herbs with it, and here it’s the opposite: plates of chilis, basil, mint, and some leaves I can’t quite identify but happily shredded up and threw in the bowl anyway. I’ve been asking for hot chilis to put in my beer, and it takes a lot of convincing that i know what that means and won’t start crying when I drink it.

Be Be tailors in Hoi An

I visited a tailor today to get a Halloween costume made. When I showed the seamstress a picture of the dress I wanted, I was quite surprised when she lit up and said “oh, you dragon queen! Game of throne!” She took a million measurements, let me select colors of fabric, and told me to come back in 24 hours for a fitting. (I will NOT be posting pictures of the dress, you’ll just have to wait until October if you want to see it…)

One interesting thing: people ask me where I’m from and I automatically say “Texas”, which makes the locals look at me confused, because they’re asking what country I’m from and Texas isn’t a country they’ve heard of. So I started to respond with “America”, and that confuses some people as well, as the follow-up question they ask is “what country in America?” I’ve figured this out: America is not a country, it’s a continent (at least to all the people that don’t live on it). You have to say “United States” to get the point across. If people HAVE heard of Texas, they ask me if I’m a cowboy and if I like George Bush (Ugh). Crazily enough, I just met a girl from Amsterdam who not only has been to Austin, but also went line dancing in Gruene! What a small world 🙂

This entry was posted in Uncategorized. Bookmark the permalink.